Join us! Interested in becoming an endorser? Fill out this form to officially back Gabriella’s campaign! We’re asking community leaders, organizations, influencers, elected officials, and everyday supporters to put their name behind mine. Your name will appear on a list of endorsers on my campaign website.

Democratic Socialist of American in Tucson 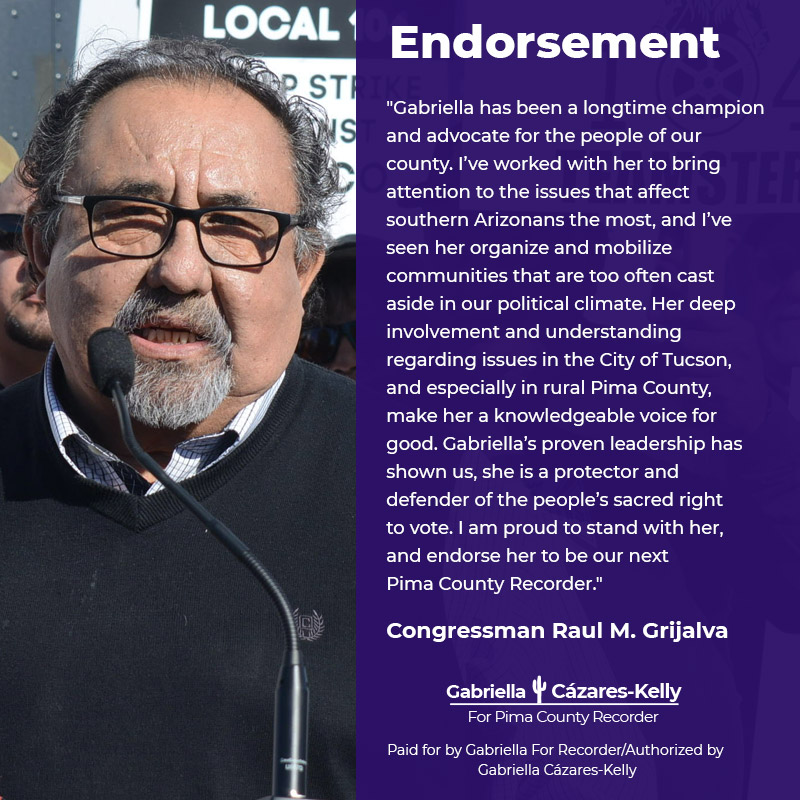 Image: Endorsement Graphic. Includes photo of Raul Grijalva standing at lectern with a microphone, on a picket line. Behind him are teamsters and union workers with signs that read, “USW Fair Contract Now!” “Teamsters Local 104 on ULP Strike Against ASARCO”

Text reads: “Gabriella has been a longtime champion and advocate for the people of our county. I’ve worked with her to bring attention to the issues that affect southern Arizonans the most, and I’ve seen her organize and mobilize communities that are too often cast aside in our political climate. Her deep involvement and understanding regarding issues in the City of Tucson, and especially in rural Pima County, make her a knowledgeable voice for good. Gabriella’s proven leadership has shown us, she is a protector and defender of the people’s sacred right to vote. I am proud to stand with her, and endorse her to be our next Pima County Recorder.” 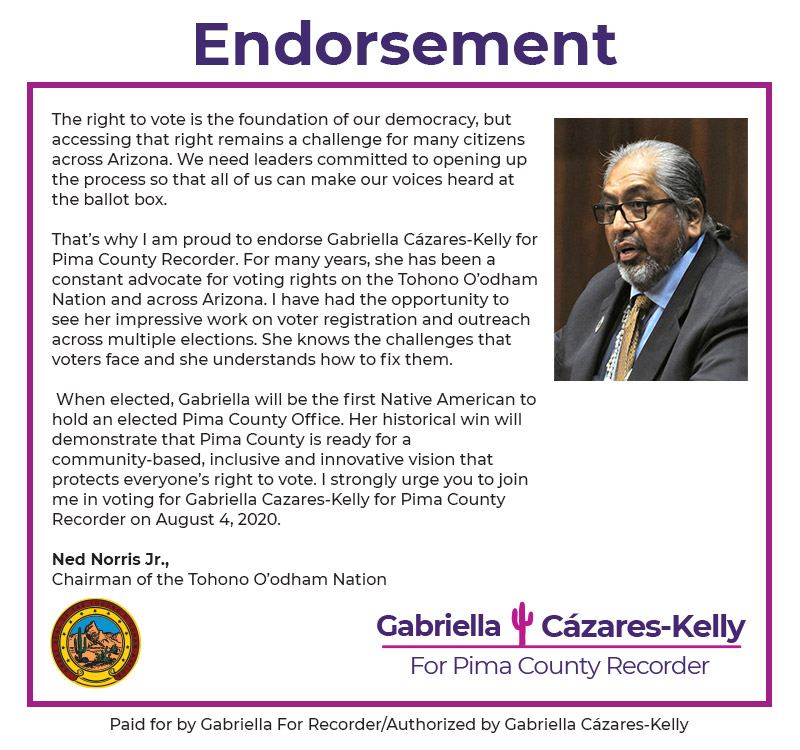 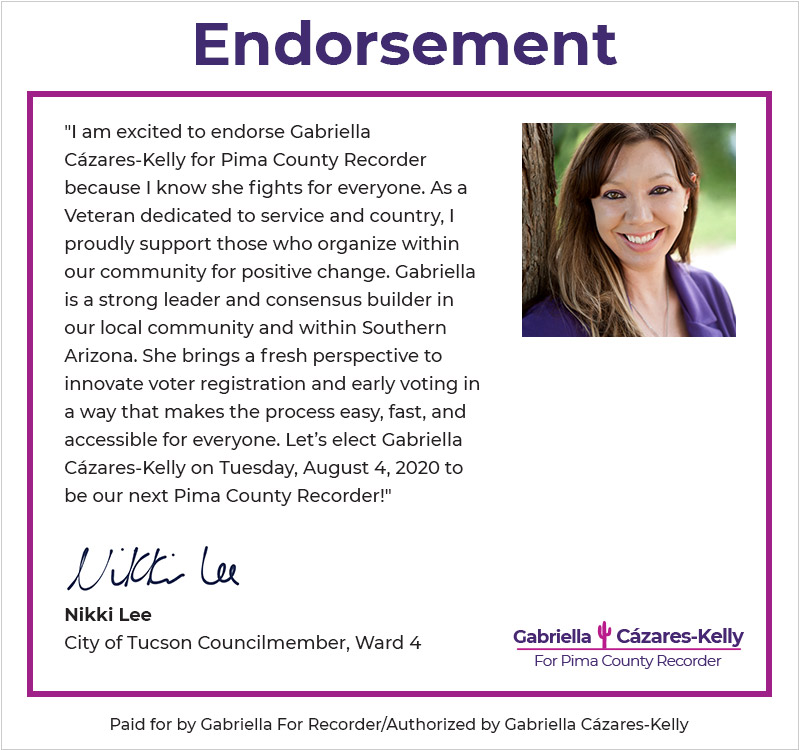 Image: Graphic with photo of Nikki Lee, smiling with the following text:
Endorsement: “I am excited to endorse Gabriella Cázares-Kelly for Pima County Recorder because I know she fights for everyone. As a Veteran dedicated to service and country, I proudly support those who organize within our community for positive change. Gabriella is a strong leader and consensus builder in our local community and within Southern Arizona. She brings a fresh perspective to innovate voter registration and early voting in a way that makes the process easy, fast, and accessible for everyone. Let’s elect Gabriella Cázares-Kelly on Tuesday, August 4, 2020 to be our next Pima County Recorder!”
City of Tucson Council member, Nikki Lee, Ward 4 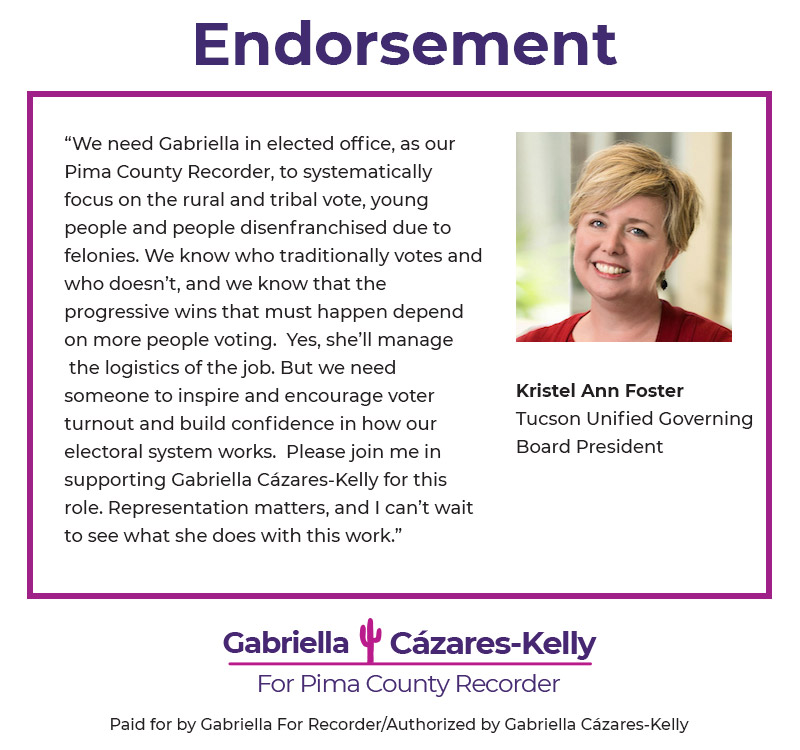 Text Reads: Endorsement “We need Gabriella in elected office, as our Pima County Recorder, to systematically focus on the rural and tribal vote, young people and people disenfranchised due to felonies. We know who traditionally votes and who doesn’t, and we know that the progressive wins that must happen depend on more people voting. Yes, she’ll manage the logistics of the job. But we need someone to inspire and encourage voter turnout and build confidence in how our electoral system works. Please join me in supporting Gabriella Cázares-Kelly for this role. Representation matters, and I can’t wait to see what she does with this work.” 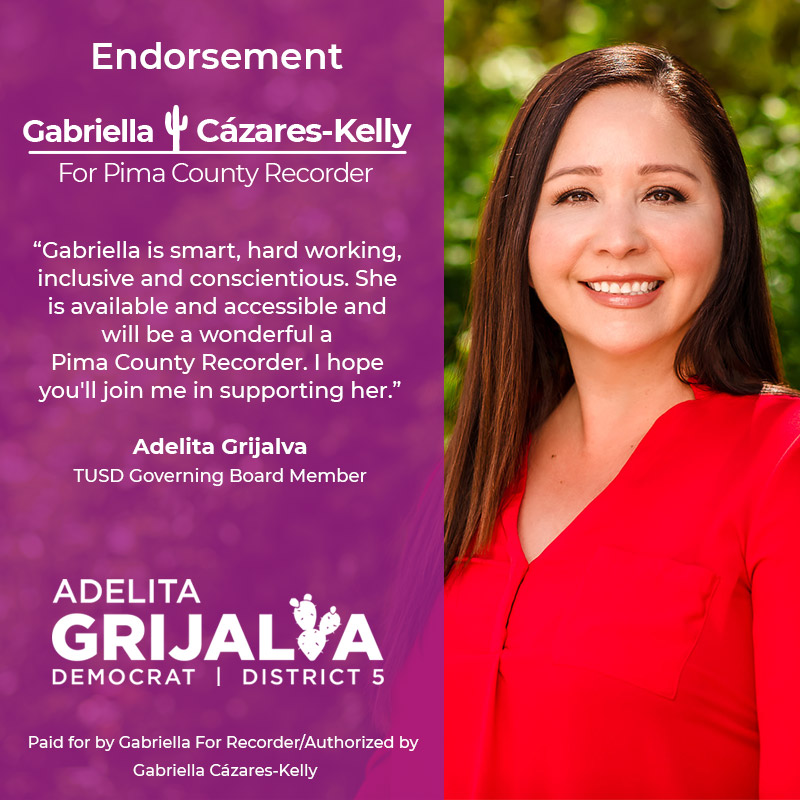 Text reads: Endorsement “Gabriella is smart, hard working, inclusive and conscientious. She is available and accessible and will be a wonderful Pima County Recorder. I hope you’ll join me in supporting her.” 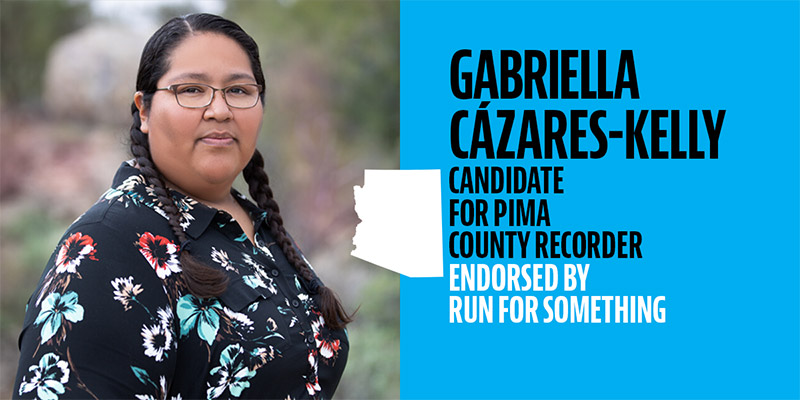 Run For Something is a national organization dedicated to helping young (under 40),diverse, progressives get elected to office! 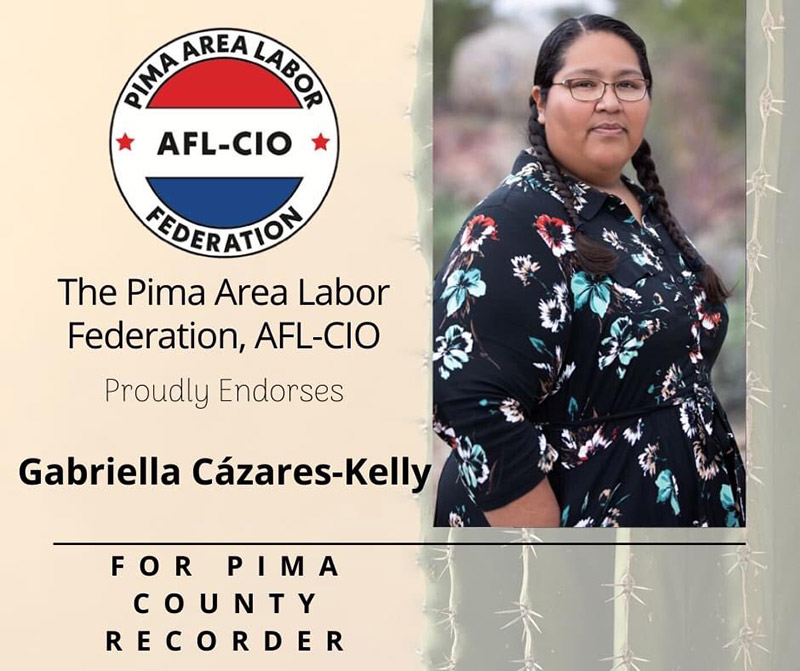 Image: Graphic with Photo of Gabriella, wearing a dress, braided hair and glasses. 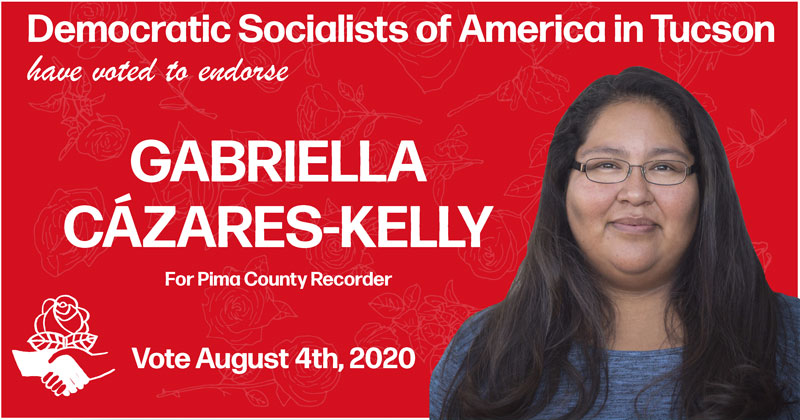 Image: Graphic with photo of Gabriella with red background and DSA hand to hand and rose logo 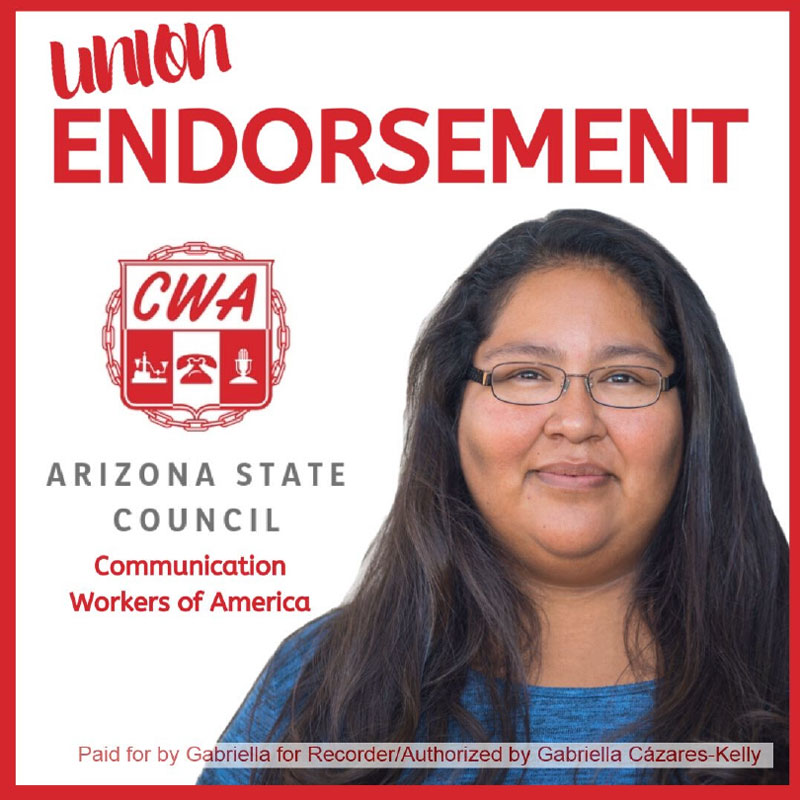 Image with photo of Gabriella and the following text: 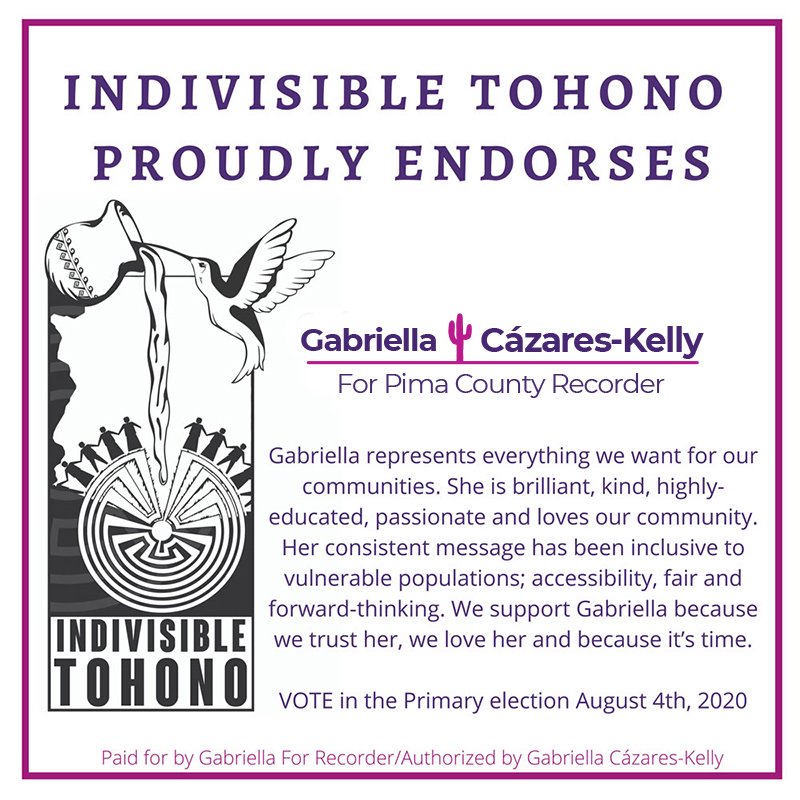 Gabriella represents everything we want for our communities. She is brilliant, kind, highly-educated, passionate and loves our community.
Her consistent message has been inclusive to vulnerable populations; accessibility, fair and forward-thinking. We support Gabriella because we trust her, we love her and because it’s time.

The Indivisible Tohono logo is framed by the outline of the state of Arizona. The Man in the Maze symbol, which is an important symbol to our tribe, the Tohono O’odham Nation, rests partially in Arizona and partially in Mexico, just like our traditional lands. Normally, men lead dancers like the ones on the edge of the Man in the Maze, but in our version, two women are both starting and ending the dance, to honor the four women who founded Indivisible Tohono. There is an olla spilling water down into the maze, to indicate Water is Life and the hummingbird, the smallest, but bravest animal is a reminder that even the smallest group, can make a big impact. 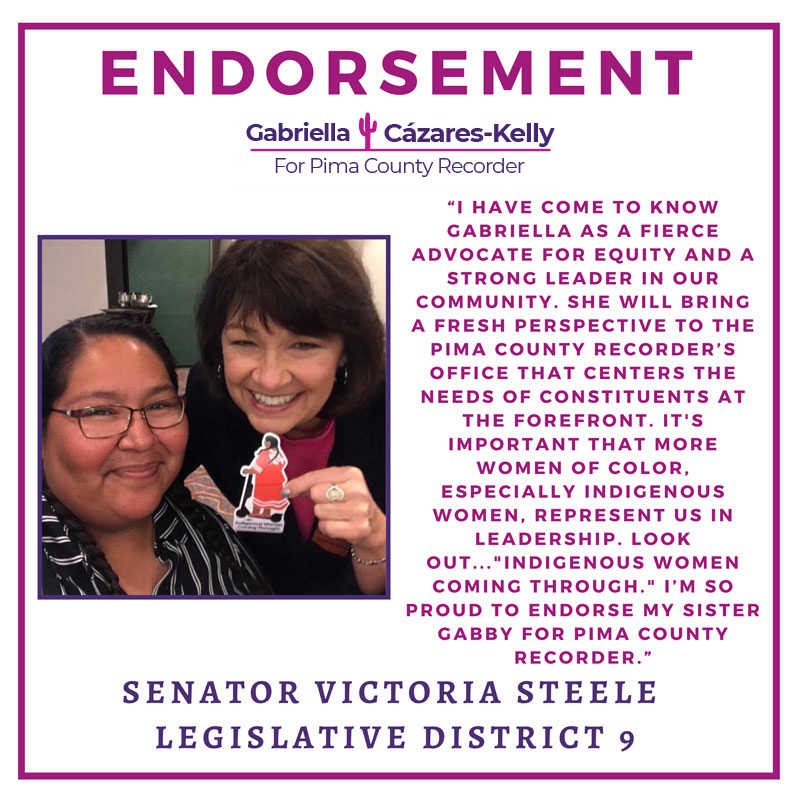 “I have come to know Gabriella as a fierce advocate for equity and a strong leader in our community. She will bring a fresh perspective to the Pima County Recorder’s Office that centers the needs of constituents at the forefront. It’s important that more women of color, especially Indigenous women, represent us in leadership. Look out… ‘Indigenous Women Coming Through.’ I’m so proud to endorse my Sister Gabby for Pima County Recorder.” 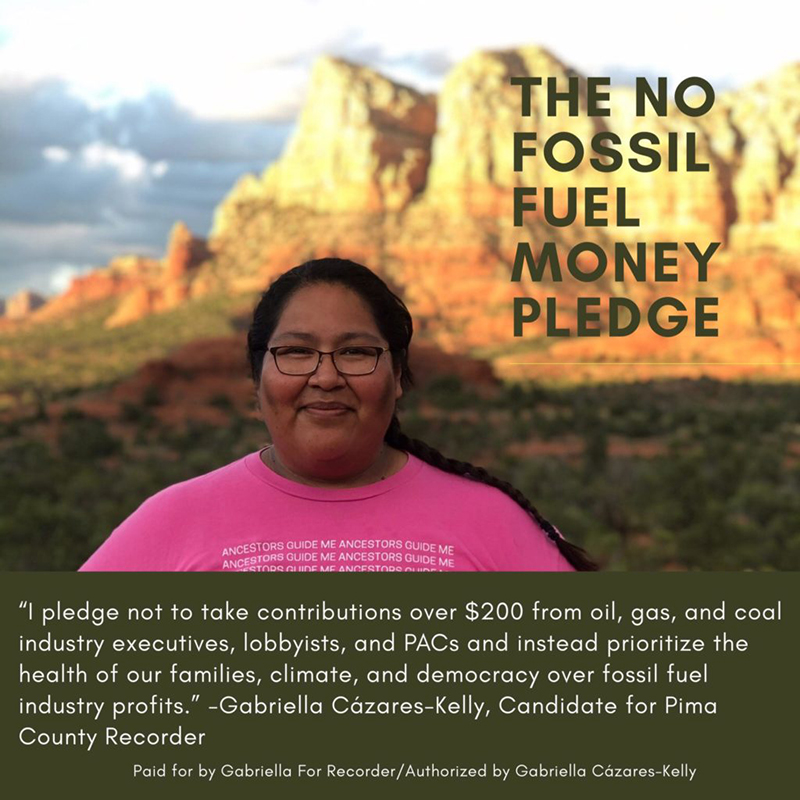 Image: Gabriella smiling into the camera wearing a t-shirt that says, “My Ancestors Guide Me.” Sedona mountains are in the background and

The No Fossil Fuel Money Pledge

I pledge not to take contributions over $200 from oil, gas, and coal industry executives, lobbyists, and PACs and instead prioritize the health of our families, climate, and democracy over fossil fuel industry profits. -Gabriella Cázares-Kelly, Candidate for Pima County Recorder